Mauritius Island, like other islands in the Indian Ocean, wouldn’t be the same today without its sega.

The sega or ‘tchega’ has its origins in East Africa as it appears in the island around the seventeenth century, through the slaves who were bought for force labors in the plantations. They brought with them African’s tam-tam and drums which were then mix with hand-made instruments built with goat skins, small stones, and wood. 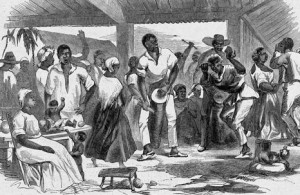 Sega was not only a spellbinding dance but also a way for the slaves to express the pain associated with their uprooting. This sacred dance rhythm accompanied the slaves during the important moments of their slavery. It brought together different people and slaves in joy and harmony into a magical dance-trance (the Babani). The songs were then made in creole, a mix of languages, symbol of sharing and bringing people together.

This transcendental expression which was the sega has gradually left the place to entertainment. You’ll probably be able to catch a show at one of the hotels in the North of Mauritius, with beautiful women dancers and their huge colorful skirts along with some playful and joyful musicians. All of them around a nice campfire on the beach.
You can also go to visit one of the public beaches on Sundays, and why not joining a group of happy lads dancing and singing their Sega. The sega’s dance steps are quite simple, with mainly the feet not leaving the ground because it the rest of the body (mostly the hips for the women) who moves in the rhythms of the ravannes. 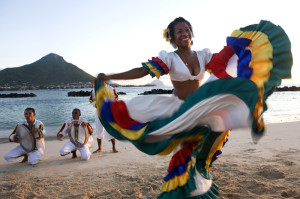 Even though the typical and traditional Sega is on its way to disappear (with the modern instruments and the commercial style music), it survive thanks to talented local artists such as Ti Frere (considered as the Sega King of Mauritius), Fanfan, Menwar (who perfectly blends modernity and tradition in his nice compositions) or Kaya (inventor of a Seggae a mixture of Sega and Reggae).

The traditional instruments which are inseparable from the Sega and which had crossed the time with it are:
- The ravanne: the symbolic percussion of Sega is made out of goat skin stretched over wooden circle (similar to a large tambourine)
- The maravanne: kind of rectangular music box made with aligned sugar cane and filled with small stones, seeds or beads. The instrument should be shaken rhythmically by the musician.
- The Triangle: metal triangle played by the musician with a metal rod
- The makalapo: mono-chord instrument with a sound box that was made long time ago using a dried gourd. The box used to be buried in the earth as it was said it allowed the musician to communicate with the ancestors and to make the dead dance. (video)

The Sega perfectly represent Mauritius, as it is not just a dance but a heritage. Its dance and songs are an emancipation of the soul that pushes the miseries of life away while celebrating the joy and happiness that every human being is seeking. Sega is a story and a sharing, a way to bring all people together in harmony and peace by taking down all the boundaries.

If you happen to come across a group of Mauritian feasting on the beach around a campfire, feel free to join them in their dances. They will welcome you undoubtedly with great pleasure and you will have a very fun and unforgetable time. “Roule roule roule” or “casse les reins” will invite you to wiggle rhythmically raising your hands “la haut” (or up). 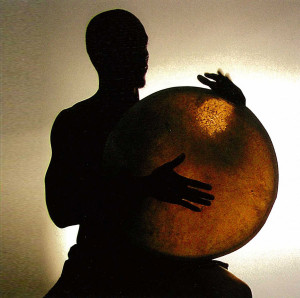